On Friday morning at Ferrwood Music Camp a “thank you” breakfast was held recognizing the many individuals who were involved in replacing the kitchen that became obsolete. A photo was circulated showing the griddle refusing to warm up as a few hundred pancakes were waiting to be prepared! At the invitation of Phil Latella, music camp director and chef, a “maiden” breakfast was prepared as an expression of thanks to fellow volunteers and the CAN DO Community Foundation.  Board member Chris Stamatopoulos mentioned, “there are so many known and unknown people who have taken part in this project that became much more complicated than ever imagined”. Phil was assisted by a volunteer kitchen crew that return for every camp. 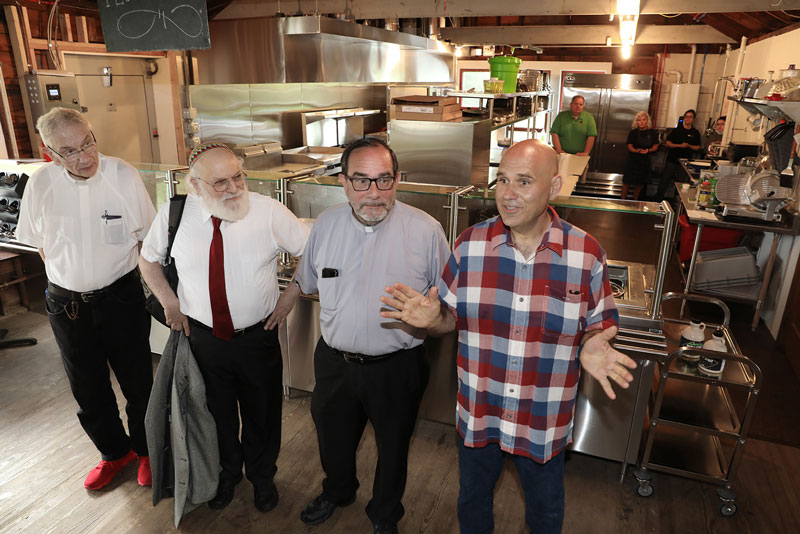 A “thank you” breakfast and dedication was held on July 9 at Ferrwood Music Camp to recognize the many individuals who were involved in restoring the camp’s kitchen. Pictured participating in the event are, from left: Pastor Earl Roberts, Rabbi Yosef Zylberberg, Father Anthony Generose and Ferrwood Music Camp Director Phil Latella.The Foundation has spent many years overseeing the restoration of Ferrwood. Thanks to the support of the community, donated labor and materials, contributions from individuals, businesses, foundations, unions and various grants, the foundation is successful in its continuing effort of restoring this historic gem located in Drums. The kitchen is the most recent result of this generosity. CAN DO staff are integral in the maintaining and operating the land mark.

A blessing ceremony of the kitchen was held prior to the breakfast with Father Anthony Generose, Pastor Earl Roberts and Rabbi Yosef Zylberberg officiating.

Ferrwood Music Camp is in full swing, a local tradition begun by “Father Joe” Ferrara in 1969.

Under the leadership of volunteers Latella, Stamatopoulos and Nancy Stasko and the support of an army of volunteers, (some of whom were taught by Father Joe) the rich tradition of overnight and day campers continues.  Campers receive instruction from accomplished instructors and enjoy outdoor activities.  A free open air concert is performed on Friday nights.

“Campership” or scholarship awards to attend the camp continue to grow through the generosity of individuals, businesses and foundations.

For more information visit the Ferrwood Music Camp (http://www.ceomusiccamp.org/ferrwoodnew/) and the CAN DO Community Foundation (https://candocommunityfoundation.com/) websites.