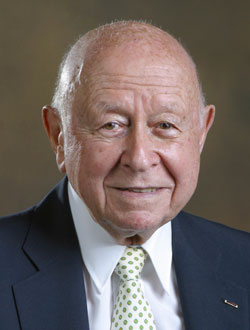 The Edgar L. Dessen Community Service Award recognizes area high school students and their volunteer efforts in the community. Through the Dessen award, a scholarship to Junior Leadership of Hazleton is awarded to eligible high school students to further their experience in service and learning leadership and teamwork skills. Scholarships to Junior Leadership of Hazleton are awarded to sophomores from each of the area high schools: Hazleton Area High School, Weatherly Area High School, MMI Preparatory School, Immanuel Christian High School and Marian Catholic High School.

The scholarship is named after CAN DO's founder, Dr. Edgar L. Dessen. In 1956, volunteers from the communities of Greater Hazleton rallied with Dr. Dessen to establish CAN DO, the Community Area Economic Development Organization. At that time, the future of Hazleton was bleak, and the need for new business and jobs was paramount. What seemed to be impossible turned into reality. Industry came to Hazleton. Jobs became available. And it was the work of volunteers that made it possible - a group of area residents who banded together and turned the tide.

It was Dr. Dessen who quoted Sir Isaac Newton, “If I have seen further… it is by standing upon the shoulders of giants.”

"Upon the Shoulders of Giants" became the way Dessen described the strength he received from community volunteers in his leadership role of establishing and growing CAN DO.

Today, the spirit of volunteerism thrives in this area. CAN DO, the Greater Hazleton Chamber of Commerce, the many agencies of the United Way of Greater Hazleton, the Hazleton Area Public Library, hospital boards, schools, places of worship, telethons, community service groups and many, many other organizations all benefit from community volunteers.

The Dessen award and Junior Leadership of Hazleton encourage youth to volunteer in their community as they learn valuable leadership skills.